One of the main ingredients in Dominican dishes is the plantain. It’s the perfect, versatile accompaniment with chicken stews, rice with beans or vegetables. Dominicans are one of the largest Latino communities in New York City and as such, they diversify the culinary experience in the city. The listed restaurants offer a wide variety of […] The Puerto Rican diaspora in New York City is not a new trend. In fact, Puerto Ricans have emigrated from the island since the 1930s. Over time, New York has become home to generations of Puerto Ricans. Puerto Rican food can be enjoyed in the Big Apple with many restaurants preparing classics like mofongo, rice […] 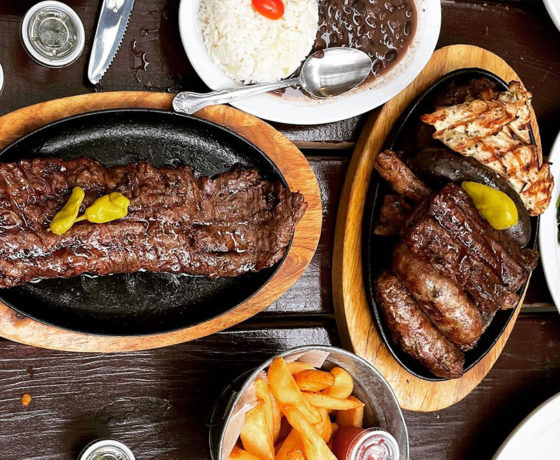 If you’re in NYC, you don’t need to travel far to savor traditional Argentine cuisine. Influenced by Spanish and Italian colonization, Argentine cuisine has much to offer. In New York City, Argentine restaurants stand out from other latin food and steakhouses, serving a variety of roast meats, pastas, barbecues and other classics. Read the list […] Since the 1990s, the Colombian community has immigrated to the United States in large numbers. As one of the most vibrant groups of Hispanics in Florida, Orlando is home to many generations of Colombians. In the city you can find a variety of restaurants that pay tribute to their homeland with traditional and modern dishes. […] Cuban Restaurants have been around for a long time in New York City. With roots in NYC since the 1800’s, the Cuban Community in New York is vibrant and thriving. With this Cuban community comes incredible culture and amazing food. Today, there are countless traditional and modern Cuban restaurants to satisfy the palate all around […] With a rich historic legacy that includes Asian, European and North American roots, Peruvian cuisine contains elements from a variety of cultures. The city of Orlando is now home to a number of Latin American immigrants, with the Peruvian community as a large percentage. As a way to reconnect with their homeland, there are a […] While the vast majority of Peruvians have made Paterson, NJ their home, a number of Peruvian immigrants came to Jackson Heights in the 1980’s and 90’s. With an increased Peruvian population came increased demand for Peruvian food and a better understanding of this world class cuisine from non Peruvians. With influences from the native Incan […] Made with sugar, muddled lime, and cachaca, Caipirinha is one of Brazil’s national cocktails and the country’s most valued treasure thanks to its preference by many a restaurant visitor. The delicious drink is prepared by mixing sugar and lime fruit before adding liquor, sweetness, and sophistication. The following restaurants offer the best Caipirinha New York […] While the Argentinian diaspora throughout the United States is vibrant, New York and Los Angeles tend to specialize in Argentinian steakhouses. With incredibly diverse populations, restaurant goers in those markets are more open to new cuisines and approaches to cooking. So it’s no surprise that a large portion of our list of the Best Argentinian […] Everyone loves a great meal – but it tastes even better when you get a good price on it. Central Florida is chock full of college students, young people getting a start to their careers and immigrant communities from Latin America who have recently traveled to the US. Luckily in Orlando you can find some […]